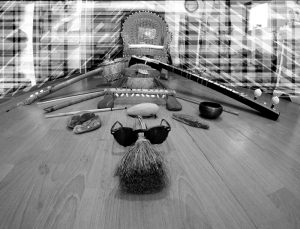 INTIM ART is a poly instrumentist from Balearic Island who started playing sitar since the age of 18. He went to Benares and he studied with DR.Raj Bhan Singh, Ajit Singh, Padmabhan Singh ; then next years he studied with Panditji Amar Nath Misrna.

He starded to compose on 1996 making his own private studio INTIM.ART .

He has played all around spain as solist, particpated in meditation campus and colaborated with different bands like SEXY SADIE, les ZINEDINES, TOGETHER …

Actually he makes instruments, study harp, sitar, piano…  and keep on composing his own music albums .

*the Locus Amoenus;
Presented in the Bucolic Literature as the ideal place,
of tranquility … meditation
a beautiful forest or a place similar to an island in the Mediterranean …
libraries are ¨ places ¨ amoenus also,
The gardens that provide us a ¨switch off ¨ from the current rhymes,
how do you can get calmness?
the LOCUS AMOENUS arises from the vital needs, to « transgressor » in the middle of frivolous times where there is no silence for nowhere, nor space for individual intimacy … how and how we connect many of us; people and animals of this planet.

* THE SENSE OF SKY

THIS ALBUM IS THE POETICAL ONE, IS A SORT OF MITOPOESIS SPEECH .

IT BRINGS TO A PERSONAL EXPERIENCE, DEFINING THE RESEARCHED PATTERN FOR WRITE MY OWN MUSIC IN THIS DAYS  WE LIVE OF GLOBALISSED INFLUENCES …

THE ART IS TIMELESS, EACH TIME WE LISTEN A WORK  WE CAN DEJOY AN EMOTION THAT WAS ¨FROSED¨  IN THE TIME TO  BE SHARED AMONG US .

THIS ALBUM IT HASN´T THE CONVENTIONAL NUMBER OF TRACKS AND TIME THAT THE INDUSTRY OF MUSIC IS DEMANDING   TO BE SELLED AND COMERCIALISSED  AS A PRODUCT .I JUST COMPOSSED THE WORKS WICH MY MUSIC IT NEEDS TO BE  UNDERSTANDABLE.

THE BALANCE ; IT MEANS TO ME.

I FEEL OUTSIDED ABOUT MY VISION OF COMUNICATE TROUGH UP THE ART OF MUSIC.

EVENTUALLY I HAVE USED THE ANCIENT PATTERNS OF MAKING MUSIC FOR MY OWN .

IN THIS ALBUM THE LISTENER CAN APRECIATE A POLITE WORK IN THE LEAD SINGING FOR BAROQUE FLUTE, FLOBIOL ( balear  ethnic  flute)   MAINLY  . AS OTHERS IN WIND SECTION LIKE OCARINA, BOMBARDINO, CLARINET, THIN WHISTLE…

THE LEVER HARP ALSO IT HAS BEEN THE INSPIRATION THIS NEW WORK FOR INTIM.ART.

THE TITLES OF {EL  SENTIT  DEL  CEL } THEY´RE DEDICATED TO FRIENDS, MASTERS, TO THE ISLAND OF MALLORCA AS A  PARTICULAR  ¨LOCUS  AMOENUS ¨ TO LIVE AND WHERE TIME IT CAN BE DIFERENT, SLOW BUT ALSO WITH ALL THE  CONTRAST THAT IN A MASSIFICATED  WORLD WE LIVE. IT HAS TO INSPIRE TO PRESERVE AND SEE THAT WE NEED TO BE  SENSIBLE WITH THE MATTER OF OUR ENVIRONMENT, OUR BLUE PLANET. 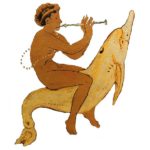 In 2015 in mallorca island, i visited an ancestral spot of the seaside, where there´s a Necropolis wich was made and used by phonecians  tribe and also natural caves near by . I starded to study the pre-history of the island where i belong  ..
The blue sea and these facts are the album it felt inspired .

In the same moments I was doing my own first experience making a LIRE MITHOLOGIC (ancestral instrument from mediterranean sea lands) .

These are the elements of my enthusiasm on those days .

My curiosity to fancy how those societies could make a posible music which we never heard ; it seduce my fancy to create

a ¨sound ¨, a contemporary vision dedicated to those primitive ethnicities that remain sleeping in the echoes of time…

The album has the eastern flavours indeed, the emotion of mediterranean sensibility, rescuing primitive musical instruments
of balearic islands such as wind instruments, stringed ones and percussion among other textures .

I make a homage to few of malloca´s celebrities minds such as :
RAMON  LLULL ( Mistic,writer..13 C )

To my masters in general . My work has always a literary context indeed …

Starded after my first visit to Benares – India as a need to express all my sensations, experimentation with
¨the  sound¨  creative studio recording…  By my own at home studio house in Mallorca . I was 19 years old only
but my cultural background on music was focused on electroacoustic pioners like John Cage, Wolf Vostell, etc …

Also with the british folkies such as ; Incredible String Band, The Pentagle, Nick Drake… ethnic sounds and the classical hindu music in  the main place …

In the album we can apreciate a leit motiv guided by the NAÏF aesthetics, bucolic soundscapes, like the tittle sugest
in fact to the sensible vision of elements and intimacy within a poetic and dreamy structures, very risky ideas indeed trough the whole  album experimentation…
With instruments as ; guitars, clarinet, midival harp, sitar, harmonium, lute, piano, samplers of the nature, glockenspiel, banjo, sarangi, voices of child, me and a french man, percussions also, etc…

The album was compiled trough 2 cicles, then on those days, i had a lot of musical material recorded to edit, my first edition ; my debut as a  musical author composser .

First cicle was compossed before Charlotte (our daughter weren´t born still) and the second cicle is opened with the ¨wellcome¨ to the new baby born and all what  she inspired to me on those days… a celebration to the life .
IMTIM ART. 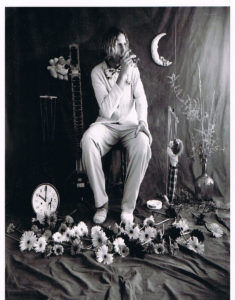 SITAR FOR CALCUTTA, is a beneficial work for the children of slums of Calcuta margianated areas.